J-jo (26 months) is working his way through the letter sounds.  Although I love Dwyer’s method of teaching reading, I decided to still teach him the symbols to go with the sounds as I did with Bear.  I am a visual learner, Bear is a visual/auditory learner, and just in case J-jo is a visual learner, I am showing him the letters.  Dwyer would focus just on the I-Spy games without the symbols.  I have grouped the letters and we do activities to go with a group (of 4 or 5) per week.  When we reach z, I will present him the phonograms (ee, ai, etc).  That way he will still be exposed to all the sounds of the language the way Dwyer and Gettman emphasize.

First, I show him a sandpaper letter (let’s say m) and give him the first period lesson for it.  “This is the picture of the sound /m/ (letter sound, not name)  Can you say /m/?  This is /m/”  According to Reading Reflex (which is how I was trained to teach reading prior to finding out about Montessori and Dwyer), I really should say “This represents the sound /m/” EACH time, but it is really cumbersome to do so.

We play “I Spy something that starts with (insert letter sound)” with the objects from our alphabet box for the letter just introduced.

I will introduce the additional letters from the group for the week either at that time if his attention span hasn’t depleted, or later in the day, or the following day.  Once he has had the first period lesson for all the 4 letters, we play “Swat the sound.”  This is really just the second period lesson, “show me the (letter sound).”  However, to make it more fun and to use the fly swatter we purchased way back to do fly swatter painting, I have him swat the sandpaper letter. 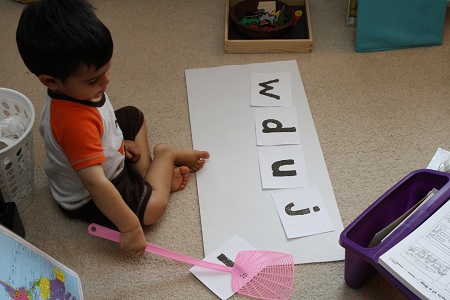 Then we will do a sort together.  I give him an object and he places it with the right beginning sound.  He can be successful with this if I only give him two letters and two objects for each letter.  I finished the one below for him so I could take a picture lol. 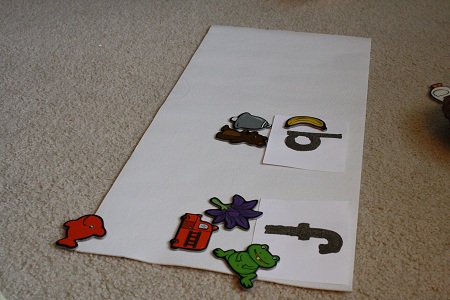 He’s not at the third period yet.  Perhaps he knows, but he won’t tell me what the letter sound is when I point to a letter and ask, “What sound is this?”  Sometimes he will, but whether he will or not is not consistent.

I also leave out his beginning sounds alphabet puzzle – only the letters from the current group – for him to work on, as he is really into puzzles right now.