Apologia Educational Ministries: What on Earth Can I Do? – a TOS review

One reason we homeschool is to ensure our kids learn about God and grow up firm in their faith.  One resource I have enjoyed to assist me in teaching Biblical Worldview has been the What We Believe Series from Apologia Educational Ministries. We used Who Am I? And What Am I Doing Here? two years ago.  This time we were sent What on Earth Can I Do?  for review.  Both times, I have been impressed with Apologia’s thoroughness.

What on Earth Can I Do? focuses on being a good and faithful steward of God’s creation and His gifts to us.  It is the fourth book in the series, but it seems to stand alone well (we have only gone through sections of the second book and are managing just fine).

What On Earth Can I Do Notebooking Journal $24.00

I am not one to think that Bible should be taught via a textbook and when one looks at an Apologia worldview book – their What We Believe series – it very closely resembles a textbook.  However, don’t let that throw you off, the books are extremely well done.  My favorite part of the What We Believe Series is the history lesson in each chapter, not a chronological history like we typically follow, but a series of vignettes of people, places, and events in history and how the words and actions of God are woven into these.

The book is beautiful, full of photographs and illustrations. Notebooking journals (regular and junior) can be purchased and these are illustrated with photographs as well.  There is also a coloring book.  The regular Notebook does not have coloring pages in it at all, while the Junior Notebook does, so if you were to buy a Junior Notebook, you wouldn’t necessarily need a coloring book for that particular child.  I was glad to receive the coloring book because I let J-jo use the Junior Notebook and allowed Bear to keep the coloring book. I intended to have her use the regular Notebook, but there is a lot of writing in the regular notebook, so we ended up doing the discussion questions out loud instead of having her write the answers.  The Junior Notebook has fill-in-the-blank activities for the vocabulary words, copy work, word searches and crossword puzzles, and mini books to complete.   The regular notebook has questions, vocabulary section for the student to write out definitions,

The age range on the book is wide – age 6 to 14 – the curriculum is so deep that it would work well for doing as a whole family, allowing each member to glean what they can manage from it.  My 4 and 6 year old obviously are coming away with it with so much less than is actually in there and I feel that a middle school aged child would benefit from this so much more. On the other hand, you want young children to begin hearing about worldview because they are so impressionable at this age and it’s so important to start forming those virtues and the lens from which they will base all decisions while they are malleable and less easily influenced by their peers.

How We Used It: 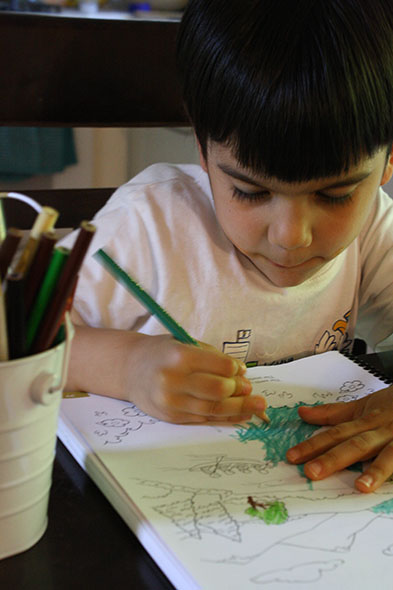 We read little by little.  I aimed for ten to fifteen minutes to get us wherever in the book it got us. While the notebooking journal comes with a schedule, it was too much reading aloud at a time for both my voice and for the kids’ concentration – but mostly for my voice. Also, the surrounding theme in the first half of the book is heavy (World War II) and so often the readings needed explanations from me. 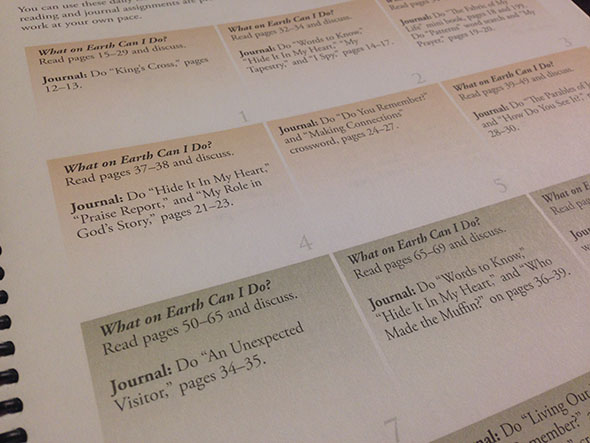 We are not ones to shelter our children from the wars in history.  I sometimes feel silly – I won’t let them watch a multitude of PG movies their friends all get to see, but I will happily read to them about World War II.  The fact of the matter is that one is very graphic, fast paced, and leaves nothing to the imagination (also often time exposing them to language I do not want them repeating  (Nemo for one, yelling “I hate you” to his father has taught my kids a great lesson, thank you Disney World’s Animal Kingdom for that one), while the other allows them to gain deeper understanding of man and understand how blessed we are to live where and when we live.  What on Earth Can I Do? is not graphic about it.  The main thread of the book is a story about a boy, Colin, and his sister who live with grandpa and mom while dad flies in the RAF.  Through the war effort, Colin learns what he can do, and how Germans are brothers in Christ (they house a prisoner of war for part of the story).  We have learned about bomb raids, gas masks, bomb shelters, and other fascinating things.  We have gotten to learn about historical figures such as Dietrich Bonhoeffer, Charlie Chaplin, Winston Churchill, and Corrie ten Boom.  Art appreciation is even included – There have been sections on Beethoven’s Fifth and Sir Walter Raleigh (a painter).  The children listen raptly.  They ask for more and are disappointed when my voice fails and I need to stop.

We aren’t there yet, but the second half of the book, the intertwining story is set in the Serengeti and tells of Amina and Jaja ad the lessons they learn about being disciplined and diligent with God’s gifts.

If you need a curriculum for teaching Biblical Worldview, I recommend Apologia Educational Ministries’ What We Believe Series.   And of the two I have used (Who Am I? And What Am I Doing Here? and now What on Earth Can I Do?), I prefer What on Earth Can I Do?.  It was exactly what I needed right now for my homeschool focus on responsible behavior and Godly character.

My Student Logbook – a TOS Review